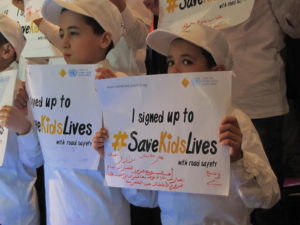 The #SaveKidsLives campaign calls on world governments to take action for road safety.

Negotiations surrounding the Post-2015 Sustainable Development Goals (SDGs) are heating up as we get closer to their official launch in September 2015. Now is a critical time to advocate for the inclusion of road safety in the Post-2015 Development Agenda by reaching out to decision-makers.

The Alliance recently co-signed a letter with Youth for Road Safety (YOURS) calling on world leaders to push for the inclusion of road safety in the Post-2015 SDGs. The letter references the #SaveKidsLives campaign and the tremendous toll that road traffic crashes take on the world’s youth population. It also encourages individual governments to attend the Second High-Level Conference on Road Safety which will take place on 18-19 November in Brasilia, Brazil.

The letter was sent to the UN Head of Mission from each country and can be found HERE.

Alliance members are highly encouraged to follow up directly with their respective government representatives to further promote road safety in the Post-2015 SDGs and thereby #SaveKidsLives.