AIP Foundation advocates for passenger helmet use in Cambodia 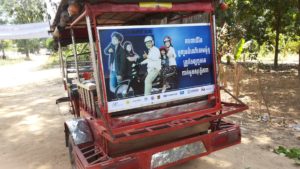 A tuk tuk driven through a commune in Cambodia delivers the message to motorcyclists, “Protect your passengers’ lives. Make sure they wear helmets.”

With 14,227 injuries and almost 2,000 fatalities in 2013 due to motorcycle crashes alongside economic costs reaching a staggering US$ 337 million, road crashes are a serious and increasingly concerning public health problem in Cambodia.

Initial results indicate helmet use rates have increased among students. Across the 18 project schools, average student helmet use rates increased from 0.4% in the pre-intervention observation to 85% in the second post-intervention observation. Meanwhile, student helmet use rates at the six control schools remained low from 0.5% to 2.3%. Additionally, a passenger helmet law was approved on January 9, 2015, mandating that all motorcycle riders—including passengers and children—wear helmets on motorcycles. AIP Foundation advocated for the passage of this law by presenting a study to the government that demonstrated 561 fatalities could be prevented, 10,574 head injuries avoided, and US$ 98,618,422 saved by 2020 if the law was passed in 2014 and enforced in 2015.

In April 2014, the project launched a communications campaign with the Public Service Announcement (PSA), “Protect your passengers’ lives. Make sure they wear helmets.” to support the implementation of the helmet passenger law. Billboards and tuk tuks bearing the campaign message can be seen in provinces in Cambodia. Watch the PSA’s TV Commercial HERE.