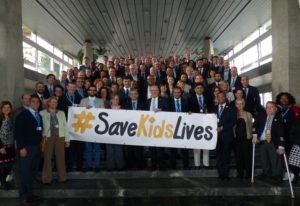 Hosted by the World Health Organization (WHO), the United Nations Road Safety Collaboration (UNRSC) held its 21st meeting on 26-27 March 2015 in Geneva, Switzerland. The UNRSC holds biannual meetings to discuss global road safety issues. This meeting was dedicated to plan for milestone initiatives in 2015: Brazil Conference, the Third UN Road Safety Week and post 2015 development agenda, as well as meet in the five UNRSC working groups.

A Brazilian delegation lead by  Mr Carlos Fernando Gallinal Cuenca, Counsellor, Head of the Division of Social Affairs, Ministry External Relations of Brazil presented the progress of planning for the Second Global High-Level Conference in Brasilia and the plans for pre- and side events. See more HERE

The Third UN Global Road Safety Week will take place in 5 weeks and partners presented their plans. If you have plans for the Week please registrar them at WHOs website HERE

The UNRSC have five project groups working on each of the five Global Plan pillars. The working groups on Road safety Management, Safer Roads and Mobility, Safer Vehicles, Safer Road Users and Post-Crash Response met to review and incorporate changes and suggestions into their work plan. The Post Crash Response group is planning a Post- Crash booklet to be finished for the Second Global High-Level Meeting in Brazil. and a draft was presented.
The WHO, working in close cooperation with the United Nations regional commissions, was invited by the United Nations General Assembly resolution A/RES58/289 on “Improving global road safety” in April 2004 to act as coordinator on road safety issues across the UN System. The World Health Assembly accepted the invitation in May 2004 and WHO subsequently established the UNRSC.

Look out for updates in the WHO’s website: http://www.who.int/roadsafety/en/.