30 km/h for Cyclists in Argentina 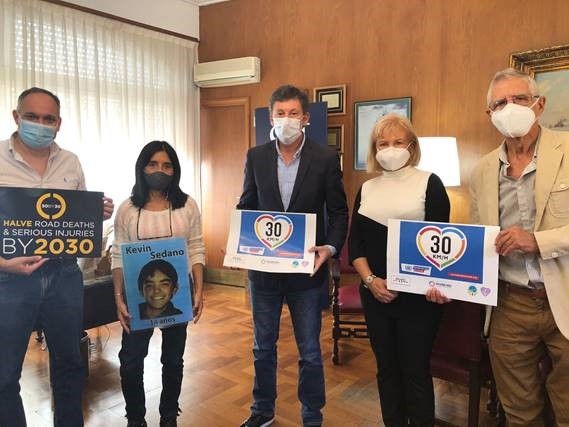 Luchemos Por La Vida and Asociación Madres del Dolor’s joint campaign for UN Global Road Safety Week (UNGRSW) gained an early boost earlier this month when the Mayor of San Isidro in Argentina gave his commitment for expansion in the number of 30km/h streets in the city. Initially, the municipality will lower the limit on streets where there are cycle lanes. Then, with input from the NGOs, will identify other streets to prioritise and implement 30km/h limits.

The two NGOs are working in coalition together under the Alliance Incubator Program, to improve cycling safety in cities in Argentina. Their 30km/h campaign for the UNGRSW is an integral element of their overall advocacy objective: low speed streets are safer for cyclists.

San Isidro is a flagship city in Argentina. Getting a commitment for 30km/h here is a significant step — what happens in San Isidro is a model for other cities in the country and has the potential to create a domino effect. Viviam Perrone, Asociación Madres del Dolor, says, “NGOs should bear in mind that big changes start in small communities, so starting in municipalities and then showing positive results, is a great way to influence decision makers in bigger cities.”

Different cities in Argentina are in different stages in the journey toward 30km/h. In Buenos Aires, a law already exists for 30km/h limits on streets with cycle lanes. However, because there are no signs indicating the limit, drivers do not slow down. Here, Luchemos Por La Vida and Association Madres Del Dolor are advocating for speed limit signs to be implemented so that drivers are clearly presented with the instruction to drive no more than 30km/h.

During UNGRSW itself, the NGOs will run a number of activities, both on and offline. They will launch the week with a downtown walk in Buenos Aires and San Isidro, replicated in other cities. Later in the week, they will organize a webinar with the authorities on “Streets for life. Why reducing 10km/h in streets save lives?” to get endorsement, and hopefully, commitment for 30km/h in these cities too.