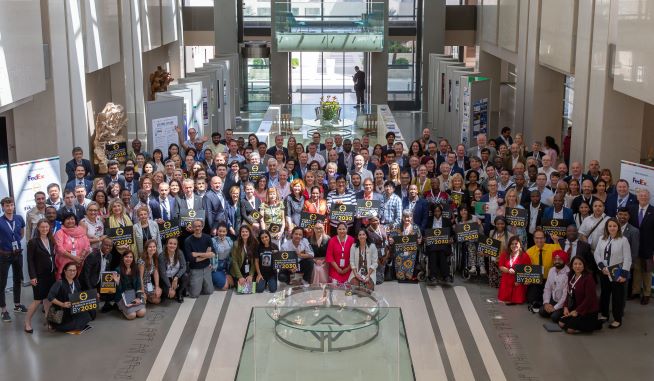 “From Global Commitment to Local Action”

The Sixth Global Meeting was held 9–13 April 2019 and was attended by 270 participants including NGOs and road safety stakeholders from 76 countries around the world.

Highlights included workshops, training, the poster exhibition opened by Jean Todt, the High-Level Symposium, the presentation of the FedEx Road Safety Award, UN Global Road Safety Week event, photo exhibition and the preparations for UN Global Road Safety Week and the Third Ministerial Conference on Road Safety in Sweden 2020. The Global Meeting culminated in the General Assembly where two new board members were elected. Read on to find out more. Find more photos from the Global Meeting HERE. Find presentations from a selection of workshops HERE.

We were honored to have the UN Secretary-General’s Special Envoy for Road Safety, Jean Todt, and Global Road Safety Ambassador Michelle Yeoh, open the poster exhibition. 44 NGOs presented posters to the high-level guests who asked questions and offered advice and support.

The exhibition was followed by a demonstration and chance to try traditional Greek dancing.

High-level panels discussed the Decade of Action, and perspectives toward 2030. The NGO Declaration was presented to Lena Kling of the Government of Sweden to signal the commitment of the NGOs toward the Third Global Ministerial Conference on Road Safety and call on governments around the world to commit strategic action and funding to road safety.

The symposium was opened with a video message from HRH Prince Michael of Kent and a welcome by Ioannis Malandrakis, Mayor of Platanias.

The second FedEx Road Safety Award was presented to three NGOs that have demonstrated exceptional growth and commitment to road safety. The three 2019 winners were:

200 people processed through the streets of Chania in support of the Fifth UN Global Road Safety Week. NGOs carried 154 photographs of road crash victims to demonstrate the number of people lost every hour on the world’s roads. NGOs wrote their commitments and demands on a board.

Saturday 13 April saw the internally-focused day of the Global Meeting. The key takeaways were preparation for the Third Global Ministerial Conference in Sweden in 2020 and the Sixth UN Global Road Safety Week.

The Global Meeting closed with the General Assembly, where members of the Alliance review progress and financials since the last General Assembly and vote on the bylaws and board appointments. Prerana Arora, People’s Trust Jaipur, and Kulanthayan Mani, Safe Kids Malaysia, were appointed to the board.

Read more about the General Assembly and see the minutes and updated bylaws HERE.

The meeting closed with NGOs sticking their commitments on the meeting room backdrop.

Almost 100% of respondents ranked the meeting to have met or exceeded their expectations. The Global Meeting exceeded expectations to the highest degree for North and Latin American participants.

Almost all participants ranked the program as very relevant or relevant.

The overall majority of respondents found that the Global Meeting was successful or very successful in meeting three of its main objectives.

A few responses to the favorite part of the meeting were:

Suggestions for the next meeting: