RoadPeace advocates for traffic crash victims’ rights in the UK 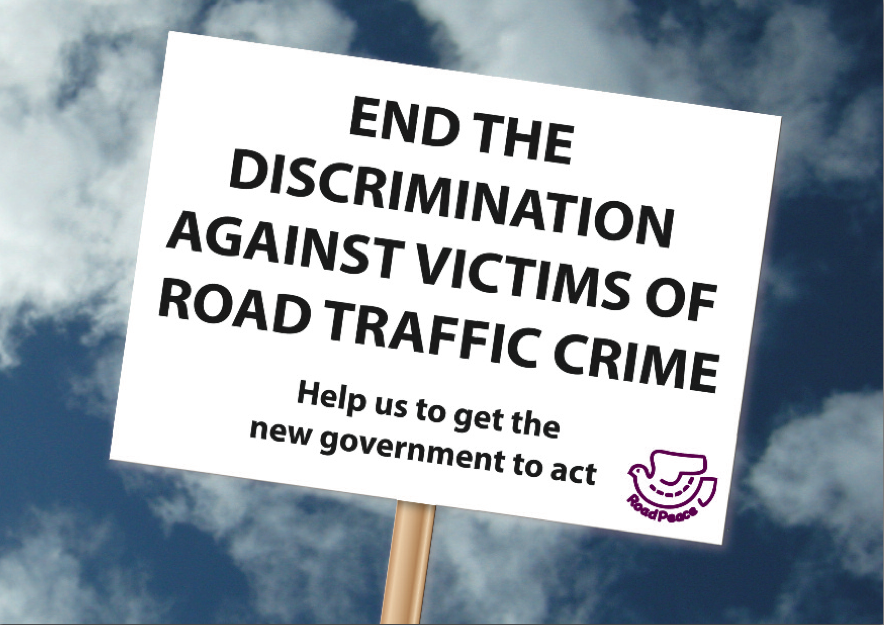 Last year, RoadPeace’s campaign Ending the Discrimination against Road Crash Victims achieved a significant victory. On 16 November 2015, the UK government widened the definition of victims of crime to include all those injured by law-breaking drivers.

The aim and mission statement of RoadPeace, an Alliance member NGO working in the United Kingdom, is to support and empower victims of road traffic crashes, to improve the post-crash response they receive, and to spare future generations from preventable death and injury. When RoadPeace was first established in 1992, the death of a road user was not mentioned or accounted for in the “careless driving” charge, which was considered a minor offense at the time. Bereaved families had to sit through court trials for drivers being charged with a minor offense without any acknowledgement that a death had been caused. RoadPeace recognized the need for increased advocacy for the rights of victims of road traffic crime (driving offenses) and they have been campaigning diligently ever since.

“Most road safety efforts focus on preventing casualties. Our project focuses on the justice system’s response to road crashes, especially culpable crashes, as we believe this will lead to safer roads,” stated RoadPeace. “In 2008, for our 15th anniversary, we highlighted 15 ways in which road crash victims were discriminated against and continue to produce annual discrimination updates.”

In May 2013, the UK Ministry of Justice (MOJ) consulted on the Code of Practice for Victims of Crime, which states the entitlements of victims to information and support. But at that time, it excluded almost all those injured by law-breaking drivers (e.g. drink/drug driving, hit and run, careless driving, speeding).

RoadPeace and its members wrote to key politicians about the need and the opportunity to extend the definition of victim of crime—defined under the “Victim’s Code”—to include victims injured by traffic offenses. RoadPeace submitted a joint response on behalf of Living Streets (the national pedestrian association), CTC (national cycling charity), British Cycling, 20s Plenty for Us, and London Cycling calling for the inclusion of victims of road traffic crime in the Victim’s Code, but the government initially rejected the call. The updated Victims’ Code released in December 2013 still excluded those injured by drink/drug driving, careless driving, speeding, hit and run, and other traffic offense.

RoadPeace then raised the issue with the Transport Safety Commission, and the Ministry of Justice was called upon to give evidence and explain their treatment of road crime victims. The Transport Safety Commission called upon the Ministry of Justice to ensure that victims of road traffic crime were treated fairly, which helped raise public awareness of the issue, but the omission of victims of traffic crime from the Victims’ Code persisted into 2014.

RoadPeace continued to lobby the Ministry of Justice and launched a postcard campaign which called for concerned citizens to contact their Parliamentarian representatives and demand the fair treatment of victims of road traffic crime. Further, RoadPeace helped to establish an “All Party Parliamentary Group for Justice on Our Roads, to further raise awareness among members of Parliament on the issue. The campaign garnered significant media attention, and several news articles were featured in The Guardian, the UK’s premiere newspaper, with one titled, “Just because someone has been killed by a car, doesn’t make it less of a death.”

In July 2015, the Ministry of Justice responded by holding another consultation on the Victims’ Code, and proposed extending the definition of victims to be fully in line with the EU Victims Directive, which includes rights for victims of road traffic crime. On 16 November 2015, victims of road traffic crime were officially included in the UK’s Victims’ Code, thereby granting families increased access to information and support. This inclusion is a major milestone for RoadPeace and advocates of road victims’ rights, but effective implementation of the new policy remains a concern. RoadPeace will be closely monitoring the the extent to which the policy goes into practice.

Read more about RoadPeace’s advocacy efforts on their website at www.roadpeace.org and check out their member profile on the Alliance website.