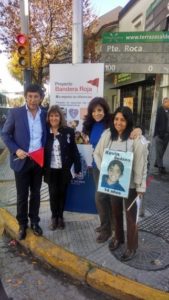 Asociación Madres del Dolor, a member of the Alliance in Argentina, launched the Red Flag Project, an initiative that aims to teach the basics of road safety to children with certain physical handicaps, during the celebration of Third UN Global Road Safety Week in May 2015. Together with physically handicapped children from different schools, social volunteers, and politicians, the staff of Asociación Madres del Dolor crossed previously-selected streets with red flags, while giving hand-outs with information on the Red Flag Project to motorists and pedestrians. The project is very important in Argentina because an initiative is at present lacking to help people with hearing difficulties cross the streets. By using red flags, drivers would be alerted by physically-handicapped individuals, and in effect realize they should be extra careful just like when they see someone holding a white cane that signifies blindness. The project will allow Argentinian streets to become more walkable and pedestrian friendly.

Asociación Madres de Dolor was inspired by May Altarejo Cueva, the Proponent and Chairman of Project C.A.R.E.S. (Community Activities Reaching to Everyone through Services) based in the province of Negros Occidental, Philippines. The Red Flag is actually based on a school requirement of a University student, Jordanne Lagtapon, and a group of young people in Bacolod City, Philippines, who call themselves “The Fearless Lifesavers Advocacy Group”; hence the name “F.L.A.G”. Jordanne, a 21-year-old student, was inspired through her research by the concept of red flaglets that are used for crossing streets in the cities of Chicago and Honolulu in the USA.

The Red Flag Project in Argentina started off in the district of San Isidro, a suburb of only 30 kilometers away from the capital city, Buenos Aires, and has a population of 300,000 inhabitants. Asociación Madres del Dolor is currently in talks with authorities in the city of Buenos Aires to explore if the project can be implemented there.