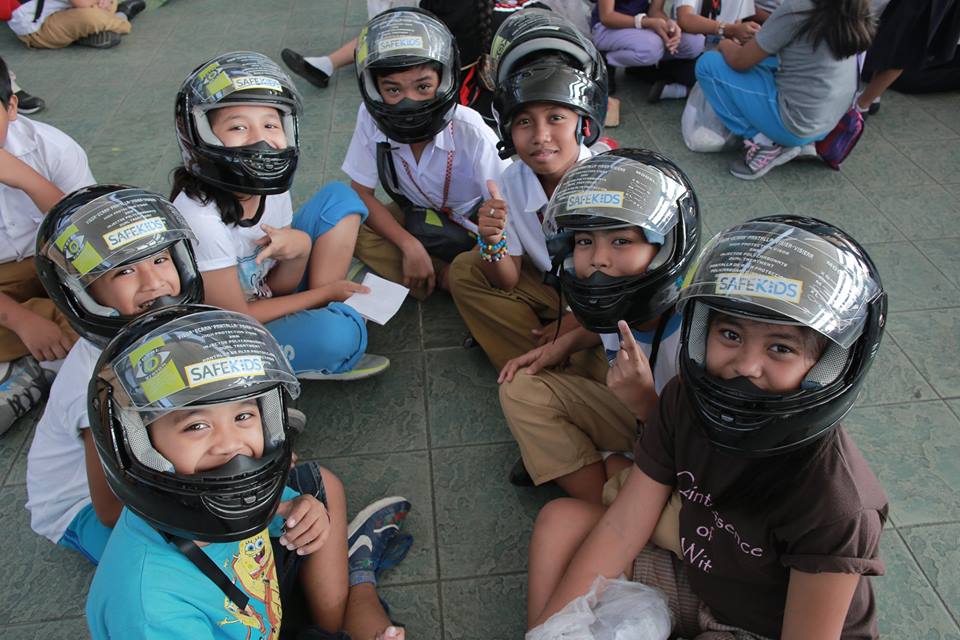 Riders of motorized two- and three-wheeled vehicles account for 53% of road deaths in the Philippines. Yet in a survey of hospitals, while 62% of road injuries were motorcycle riders, only 4% were wearing a helmet. According to another report, children on motorcycles are more vulnerable to injury than adults because their brains and skulls are not fully developed.

On 19 May 2017, a new law in the Philippines prohibiting children from traveling on motorcycles without wearing a helmet finally came into force. It had been almost two years since President Benigno Aquino III signed the Children’s Safety on Motorcycle Act of 2015 (also known as the Republic Act No 10666) but owing to political delays, only now has it been enacted. With rates of helmet use so low and because children routinely ride on motorcycles without wearing a helmet, the new law has potential to save many lives.

Alliance member Safe Kids Worldwide Philippines has been in the forefront of the push for mandatory helmet use for children since 2014, advising the National Senate and constantly following up with the Land Transportation Office (LTO) and the Department of Transportation. They were the only NGO to serve as regular consultants on the Act of 2015. They have also taken practical action, giving out 900 helmets to school children since last August. Finally, the law was signed by the Secretary of the Department of Transportation on 4 April 2017.

Amy Rolloque, Program Officer at Safe Kids Worldwide Philippines, is one of the 2016 cohort of Alliance Advocates. She chose helmet use as the focus of her Alliance Advocate action plan for the training in Memphis, Tennessee, US, last August. As she reflects on the NGO’s role in the implementation of the new law, she believes that the Advocate program has given her the confidence to push harder and with more authority. “I always remember that I am not only one person talking,” she says, “but I am ‘me’ plus the other Global Alliance Road Safety Advocates. What I am bringing on the table is not only my experience, but also the experiences of other Global Alliance Road Safety Advocates and the experiences of Malaysia and India in implementing helmet programs for kids.”

With this achievement in place, Safe Kids Worldwide Philippines is now focusing on the next piece of legislation in progress: “Defining and penalizing distracted driving”. We send them congratulations and support them in their mission to make the roads of the Philippines safer.