A Pilot Project on Reducing Speed in Kyrgyz Republic: A story of networking 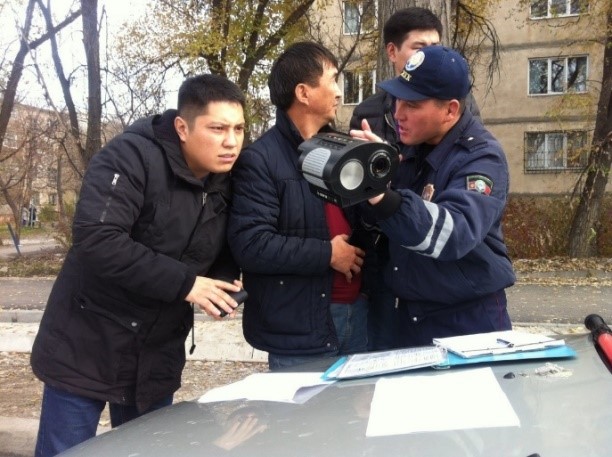 The Kyrgyz Road Safety NGO has been appointed to the new government Road Safety Commission chaired by the Kyrgyz Deputy Prime Minister, a significant accomplishment achieved in a short time span.

The Kyrgyz Road Safety NGO has come a long way in enhancing road safety through working in networks and partnering with others. From its 2012 inception until now, the NGO has implemented an impressive array of activities and advocacy efforts through vigorous participation in regional networks—proving just how important it is to join forces.

The Eastern Alliance for Safe and Sustainable Transport (EASST) was fundamental in establishing the Road Safety NGO in Kyrgyzstan. EASST is an Alliance member and a UK-based charity that works with NGOs across Eastern Europe, Central Asia, and the South Caucasus to improve their efficacy via sharing know-how and resources.

The Kyrgyz Road Safety NGO also succeeded in getting local partners onboard, including the Bishkek traffic police, the Department of Capital Construction of Mayor Hall, and others.

In a joint EU-funded project, the NGO’s main message is “Do not exceed the speed limits.” The focus on speeding is based on statistics revealing that exceeding speed limits is one of the major causes of road fatalities around the world, including in Kyrgyzstan.

One of the project’s outcomes was the release of a video aimed at the public, highlighting the need to adhere to speed limits to avoid deaths. The video release garnered effective press coverage: yet another success for the NGO. The video can be seen here, on EASST news: http://www.easst.co.uk/news/news/601.

Under the current pilot project, a survey has been conducted among Kyrgyz drivers, inquiring about the reasons for exceeding road speeds and for violating road safety rules. The survey results will be distributed to the Kyrgyz media in the near future. Furthermore, discussions are currently taking place with the local administration on installing speed bumps in one of Bishek’s high-risk areas.