What the UN Resolution Means for #50by30 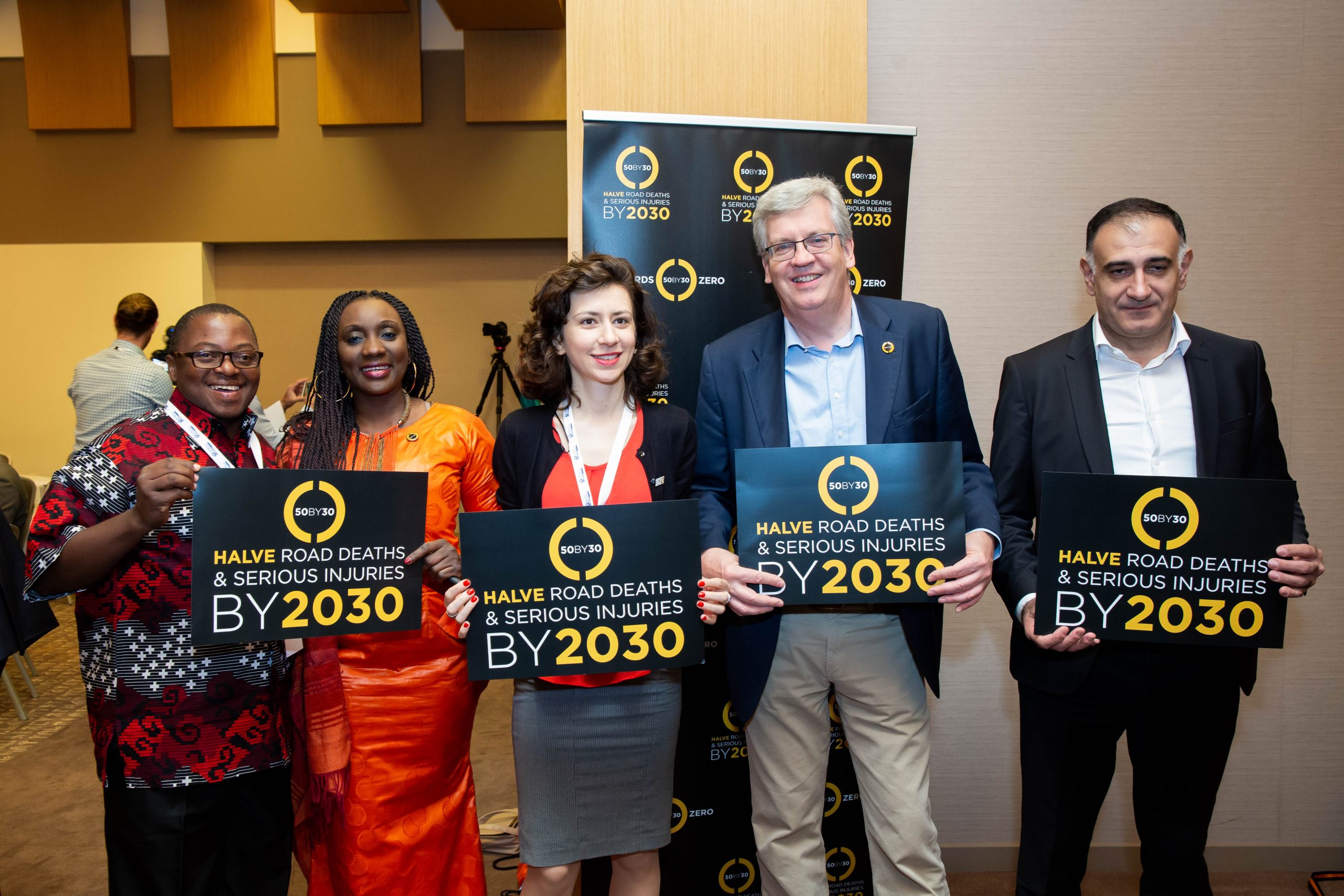 The #50by30 campaign was one of the big advocacy exercises in the lead up to the UN Resolution on Improving Global Road Safety. The campaign pushed for inclusion of a target to reduce road deaths and injuries by 50% by 2030 in the resolution. It was designed and led by the Towards Zero Foundation and executed on a number of levels, including through the NGO community.

With the 2030 target now formally adopted in the resolution, we spoke to David Ward, President of Towards Zero Foundation, about the resolution, the campaign, and what’s next.

What is your overall reaction to the resolution?

“I’m very pleased about the new resolution. Despite the strange context of the COVID-19 pandemic, this result is the best one would hope for. In comparison to the 2010 resolution that launched the first Decade of Action, which did not have a numerical target, it is a really sophisticated document. It is ambitious and systematic, addressing the safe system approach for the first time. For example, we do a lot of work in vehicle safety; it has an excellent paragraph about vehicle safety with well-drafted interventions, and this is the same across many other issues.”

It feels like the 2030 target has been on the table for a long time. Did you at any point think that it might not be included in the 2020 resolution?

“Inclusion of the 2030 target to reduce road deaths by 50% is a crucial benchmark, and at no stage could we assume that it would definitely be included. The first Decade of Action was mandated in 2010 in a resolution without a numerical target. The road safety community tried to get a target incorporated, but, because back in those days there were still quite a few governments that were very reluctant to see numerical targets, it was rejected. Instead they came up with a weaker commitment to “stabilize and then reduce.” The road safety community itself interpreted ‘stabilize and reduce’ as a 50% target. People thought that it was the target, but it was never officially recognized.

“The breakthrough for a 50% target was with the Sustainable Development Goals, although that was a mixed blessing. In fact, the road safety community asked for a 2030 target back in 2015, and actually, the initial draft document had 2030, but during the negotiations, it was decided, because there was a Decade of Action finishing in 2020, that 2020 should be the target. By the time the document was issued, it could not be changed, and we had to make the best of it.

“By 2018, it was absolutely obvious that the 2020 target wasn’t going to be met, but then we hit the issue of renewal. That’s a sensitive subject because there isn’t a procedure within the SDGs for renewing targets that expire, and, because of the rather fraught nature of UN politics these days, there was a lot of nervousness in the UN headquarters about how to renew it.

“So, we had had a resolution without a target, a target with the wrong deadline, and the challenge of renewing a target without having a formalized renewal process. So, therefore, we could not assume that the 2030 target would be accepted and adopted.”

“We realized that there needed to be a solid advocacy exercise to push and help consolidate the idea of a target for 2030. In 2018, HRH Prince Michael of Kent, Towards Zero Foundation’s patron, had the opportunity to speak in front of the UN General Assembly on behalf of the British government. In his speech, he called for a new 2030 target of a 50% reduction in deaths and serious injuries. He was the first VIP to go on record calling for the target, and it was a good idea to have a mainstream, respected figure to do that. It was at that point we we began to develop the #50by30 campaign.”

“The campaign fed into the formal preparatory process for the organization of the 3rd Global Ministerial Conference in Stockholm. Together with the Alliance, we were engaged in the steering committee, an expert panel, and a high-level stakeholder panel. We used that process to strongly recommend setting a target, in particular with the expert panel, so that policy makers could see that there was a considerable, respectable body of opinion behind the target.

“At the beginning, there were quite a lot of reservations; there was nervousness about how to do it and whether there would be pushback, and, if the target was included and failed, would it be worse than not doing it in the first place? It helped that Sweden is part of the European Union that, in parallel, was setting its own 2030 50% target, adopted in 2019.”

“Working alongside Lotte and the Alliance, we tried to build a platform of support among NGOs, because they are always the ones making things happen; they are the beating heart of the road safety community, especially in advocacy. We were able to gain their support at the Global Meeting in Crete and to encourage the Chania Declaration adopted at the meeting to include the target. We were careful not to brand the #50by30 campaign, so that anyone could pick it up and own it.”

“Alongside all of that, we did a lot of basic behind-the-scenes lobbying, which my late son, Alex, played a key role in. [David’s son, Alex Ward, sadly died of Motor Neurone Disease in July 2020, one month before the resolution was adopted.] It was a real hard graft behind the scenes, much of it quite boring: getting a database of the ministers of transport ready, making absolutely sure all the names are correct, drafting and sending them all letters, and things like that. It was the same with parliamentarians; we worked with WHO, which administrates the Global Network of Road Safety legislators and got them to support the idea of #50by30.” Alex was delighted to see #50by30 included in the Stockholm Declaration and would be very proud to see it included in the new UN resolution.”

“The campaign was bolstered by an important event during the UN Global Road Safety Week in May 2019. We hosted an international expert workshop at the European Bank for Reconstruction and Development on the role of targets, with a group of high-level policy makers. It built on a body of evidence from the International Transport Forum and UNECE and the other UN regional commissions that looked at the way that road safety targets had worked and provided good justification for target setting, especially in a Safe System setting.”

What happened after the Stockholm Declaration? Was the campaign able to scale back and “relax”?

“Advocacy is a bit like a wall of water pressure; if you don’t keep that pressure up against these global policy-making machines, they will slip backward for a number of reasons. Road safety is competing for attention against a lot of other worthy causes that are also trying very hard — whether it is the environmental movement, the wider public health agenda, or sustainable development — they are all pushing like crazy to keep the policy commitments they already have and get more. If you ease off at all, you suddenly find that the space you had just disappears. It’s about maintaining visibility. If you are a diplomat in New York, dealing with, perhaps, seven or eight different resolutions at the same time on a wide range of issues, unless you are pushed, an issue can easily slip down the agenda. So if an NGO writes to your ambassador and sets out the argument, it raises visibility and can make a significant difference.

“There was a real risk that we would end up with a view among UN ambassadors and policy makers that there had already been a target for road safety that failed in 2020, and, because of that attention, [they] should move on to another issue. That would have been disastrous, because it would have been a signal to the entire international community and all its institutions, including the development banks, donors, and corporates, that road safety wasn’t the priority anymore.

“That’s why it was so important to keep making the case and not assume it will happen by default. Some people may have thought that, once the Stockholm Declaration was done, that it was mission accomplished, but actually, that wasn’t the case; there was the whole UN process of line-by-line negotiation to go through, under very awkward COVID conditions.

“Even at this late stage, there was a concern that one or two governments would try to water down the commitments of the Stockholm Declaration. We continued lobbying in support of the Stockholm Declaration and explaining why it was important. There was some skillful negotiating by diplomats of key Member States, which we don’t claim any credit for, resulting in a very good resolution that includes the #50by30 target. It’s pleasing, because I was quite concerned that we might end up with a watered-down resolution, as we did back in 2010.”

Now that the resolution is in place, what next?

“We are in a very good starting place for a new Decade of Action, with a strong resolution. One of the things it calls for is a Global Plan of Action, with WHO, the UN Regional Commissions, and UNRSC charged with developing it. The Global Plan of Action for the last Decade of Action was useful and helped to frame countries’ policy thinking. If you look back at the trajectory of where road trauma was potentially going in 2010, the stabilization that has been achieved is actually pretty impressive, particularly in a world where motorization and population has continued to grow.

“This time we will be developing the new global plan from a much better place, in terms of understanding of issues and what works and what doesn’t. We must build on these strengths, particularly using the capacity that has been established over the past 10 years, and with NGOs in the forefront: in so many successful road safety projects, you find NGOs making the big difference, drawing people together, focusing on what matters, and speaking from the heart. There is a good opportunity to make this a more successful decade than the last, but we will have to do so in the unique post-COVID-19 circumstances.

“There are some very big challenges ahead and funding in particular remains a big problem, but I’m optimistic: #50by30 is ambitious but achievable. It is what we must do as we move towards zero deaths or serious injuries.”