Round the World Roundtable: Protecting Good Samaritans in India 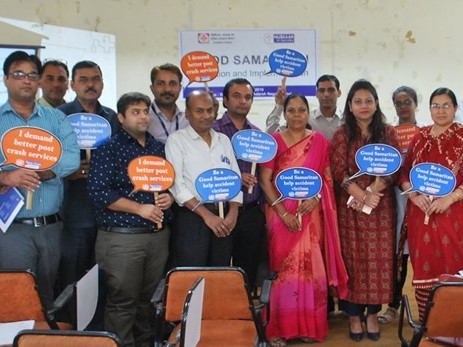 In 2016, the Supreme Court of India passed a Good Samaritan law to protect bystanders who come to the aid of those injured on the roads. With over 140,000 traffic related deaths per year in India, half of which could be prevented by timely medical attention, the role of the bystander is critical to the survival of road accident victims. The passing of the Good Samaritan Law was a huge milestone for road safety. However, implementation of the law at the ground level has been challenging due to low levels of awareness among both the public and officials, including police officers and hospital employees.

On Tuesday 22 October 2019, the Muskaan Foundation for Road Safety hosted a Round the World Roundtable in Jaipur, India. This roundtable was organised after Mr. Rajeev Swarup, Addtional Chief Secretary, Home Government of Rajasthan, and Mr. Rohit Kumar Sinhg, Addtional Chief Secretary, Medical and Health Government of Rajasthan, committed to raising awareness of the Good Samaritan Law. On their instructions a formal order was issued by concerned departments to ensure that medical professionals and police officers are aware of the rules associated with the law. Standard operating procedures were also issued for its smooth implementation.

During the roundtable hospital representatives were made aware about the Good Samaritan law and the responsibilities which are associated with it for compliance.

The commitment signed at the roundtable in Jaipur promises that hospital staff and police officials will be provided with training and written materials to ensure they are aware of the law and treat Good Samaritans justly, fairly, and without undue inconvenience. By acting on this commitment, response times will be reduced and lives will be saved on the roads.