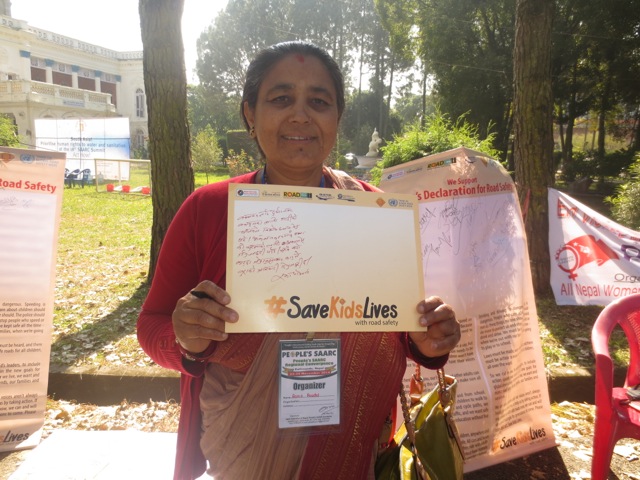 Swatantrata Abhiyan, a member organization of the Alliance in Nepal, conducted a number of activities last December 2014 in support of the #SaveKidsLives campaign. A group of youth volunteers trained by Swatantrata Abhiyan visited six different schools situated mostly on the “boundary less” side of the road that seem to provide unsafe mobility for children, and with high risk of road accident. A total of 223 students were educated through a 40-minute interactive discussion in the classroom. About 203 school children joined the #SaveKidsLives campaign—they wrote messages about road safety and took either single or group photos. Senior government officials such as the Chair of the National Human Rights Commission and the Executive Director of the Central Child Welfare Board were among those wrote messages for the #SaveKidsLives message board campaign. A total of 996 signatures were collected in support of the Child Declaration on Road Safety, as a result of posting signature boards and flyers in a number of places like the United Nations Country Office, Save the Children Country Office, and the Lalitpur Submetro Office.