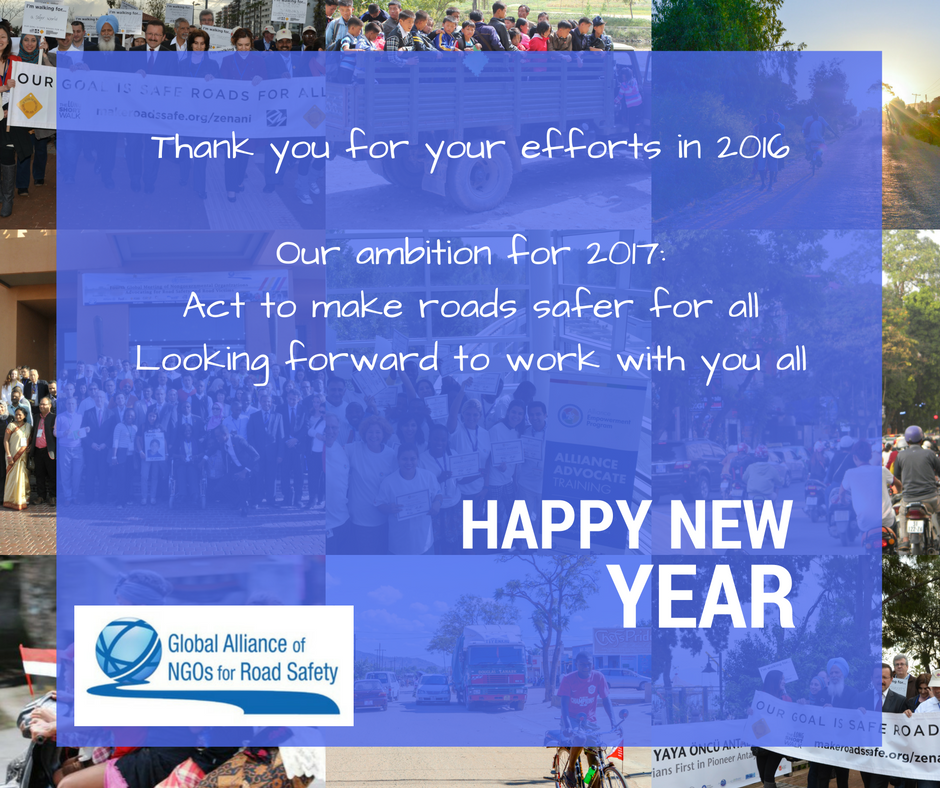 As 2016 draws to a close, the Alliance would like to wish everyone a Happy New Year!

Looking back on 2016, there is much to be proud of and the Alliance and its members saw many important advancements in global road safety.

15 April 2016 was a milestone for global road safety, as the UN General Assembly and its Member States adopted a resolution on “Improving Global Road Safety.” The resolution represents the strongest commitment to road safety ever made by UN Member States. It supports the ambitious road safety targets now included in the Global Goals for Sustainable Development and the Global Plan of the UN Decade of Action for Road Safety (2011-2020), which provides an integrated and holistic framework for road injury prevention. The resolution renews the call on governments to take a leading role in implementing the road safety-related SDG targets and the activities of the Decade of Action.

In October 2015, the Alliance organized a consultation with UNECE and the newly appointed UN Secretary-General’s Special Envoy for Road Safety to discuss the new Envoy’s plan of action and how he would collaborate with civil society to promote the global road safety agenda.  Since then, a number of members have met with him to address concerns in their countries. The Special Envoy is tasked with identifying opportunities to significantly scale up funding for road safety. As a result, the UNECE Secretariat, in collaboration with the UN Special Envoy for Road Safety, has drafted an options paper to facilitate discussions surrounding a proposed UN Road Safety Fund. The Alliance has provided important inputs to the discussion paper, as well as to the final draft that is now in hearing with UN Member States.

An internal milestone was the proud announcement in Brasilia in November 2015 of the Alliance Empowerment Program, a capacity building initiative to help Alliance Members improve their work on road safety. 2016 started with the first step in designing the program. This was accomplished by reaching out to our membership to assess current strengths, weaknesses, and needs for capacity building. To each of you who contributed such important input throughout this process, a heartfelt thank you! Your views and voices will have a direct impact on the shape of our capacity building activities.

The Alliance Empowerment Program quickly took shape. In March 2016, the first training series was launched in collaboration with iRAP, the 3-Star Coalition, and the FIA Foundation. The series, which was open to all members and non-members, featured a number of online information and advocacy sessions on International Road Assessment Programs (iRAP)’s star rating system for roads, including how to successfully advocate for a minimum three-star road standard in your country.

In August 2016, our first cohort of Alliance Advocates graduated from an intensive, tailored training program that took place over two weeks in Memphis, Tennessee, US. The newly trained Alliance Advocates will be a powerful force on the road safety stage. The one-on-one guidance and coaching has proved especially useful and beneficial for members to enhance their agenda.  There are already signs of significant push for change in the countries that attended.

Another important initiative in 2016 was the pilot of the Alliance Seed Program to fund implementation of small-scale projects that have the potential to bring about measurable change and serve as examples of best practice within our field. The pilot phase is funding four projects in total and the results will be available early next year. If it is successful, we will seek to make the seed program permanent. The pilot phase is funded by FedEx.

Laser International Foundation took the initiative to create the “Alliance Francophone Pour La Sécurité Routière” to promote cooperation between organizations and people who have in common the use of the French language. This alliance aims to help reduce the number of road deaths in francophone countries, particularly developing countries, by 2020. Its mission is to support, participate in, and develop road safety projects in collaboration with national and local stakeholders in francophone countries. The Global Alliance welcomes this initiative and hopes for much more collaboration in the years to come.

Speakers and researchers from around the globe came together in Tampere, Finland from 18-22 September to share science and practice on a range of safety subjects including road and traffic safety. Many Alliance Member NGOs joined the conference and presented their work, and several won media awards. The Alliance presented two posters, one on our Alliance Advocate training and the other on the Alliance as a whole.

The Journal of the Australasian College of Road Safety released a special issue on Global Road Safety in August 2016. The Alliance made a contribution to the publication alongside UN Road Safety Ambassadors, Michelle Yeoh and Zoleka Mandela, Bloomberg Philanthropies, and iRAP. The journal reflects on how to “sell” road safety, evaluation of safe school zones, and analyzes the conflicts and barriers to reducing fatalities.

And on the governance side, Floor Lieshout, one of the Alliance’s founding members, decided to step down as Vice-President. Valeria Motta took his place, but in November she left her position. Thank you to both Floor and Valeria for their valuable contribution to the Alliance.

These are just a few highlights from a productive year in road safety. With significant momentum gathered in 2016, it is important to not only continue, but to ramp up our efforts to improve road safety around the world. Fortunately, we know what policies and interventions work to save lives, but what we need now is the commitment from governments and civil society around the world to implement them.

Some events on the horizon for 2017 include:

The Global Alliance of NGOs for Road Safety greatly looks forward to ongoing collaboration with its members and friends in the next year, and would like to extend warm wishes for a safe and successful 2017!