Campaigning for Standardized Helmets in India 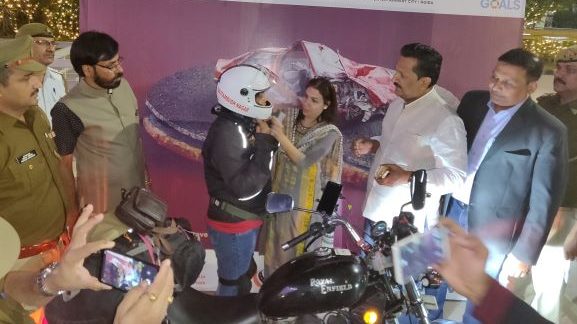 In India, riders of motorized two- and three-wheel vehicles account for over 70% of vehicles on the road and 40% of road fatalities. Of those travelling by motorcycle, only 30% of drivers and less than 10% of passengers wear a helmet. Additionally, 85% of motorcycle helmets worn do not meet safety standards. Many sub-standard helmets provide little protection and, in some cases, can cause more serious injuries than not wearing a helmet at all.

TRAX S. Society has taken up the issue of safe riding and safe helmets, tackling the problem from several angles. It began with a Delhi-based campaign entitled “Helmet India” and has now launched a national “Safe Riding Initiative.”

From an advocacy perspective, TRAX is pushing for safe, standardized helmets to become the norm.

It organized state-level stakeholder meetings in Odisha and Delhi in association with the Ministry of Road Transport and Highways (MORTH) and the Central Road Research Institute, and engaged national media. The Minister committed to make standardized helmets mandatory.

Recently, MORTH has issues a notification to bring motorcycle helmets under the Bureau of Indian Standards Act, 2016, meaning that helmets must meet safe manufacturing standards. There is someway to go before the details are finalized and TRAX have been working with stakeholders, NGOs, and manufacturers, to bring inputs to the public consultation on the Act.

The initiative involved NGOs across the country as well biker groups and generated plenty of media attention.  It was supported by a number of Alliance members including Muskaan Foundation, Safe Drive Save Life, Sudeekshan Foundation, Forum for Prevention of Road Accidents, Women & Child Welfare Society, as well as many others including Buckle Up for Safety,  Jhunjhunu Vikas Samiti, Mithila Foundation, Jan – Akrosh, VEEDHU, Arise India Foundation, ARJ Foundation,  and Rajasthan Sadak Suraksha Society.