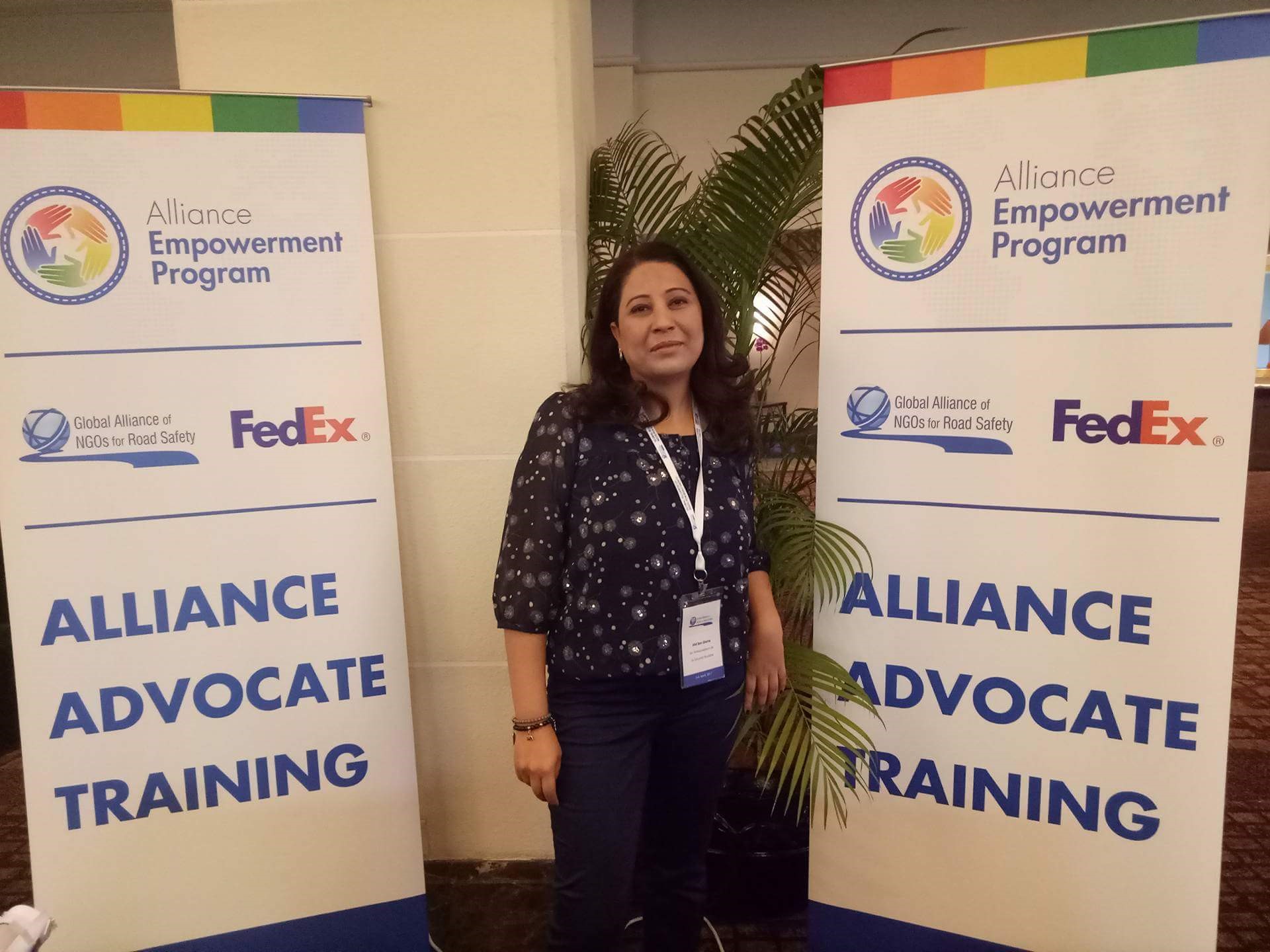 27 April 2017 was a significant date for road safety in Tunisia: it is the day that seat belts became mandatory for all drivers and front seat passengers. Next year, the law will be extended to back seat passengers. Previously, seat belts were only required on rural highways and most people did not wear them in urban areas.

This historic law is the result of the tireless work of Alliance Advocate Ben Afef Ghenia of Les Ambassadeurs de la Sécurité Routière, Tunisia. Prior to the Alliance Advocate training in Memphis, Tennessee, US in August 2016, Afef identified seat belt usage as a goal . As she took part in the training, her strategy completely changed. “It was really inspiring training,” says Afef. “I learned how to advocate and have a clear strategy. I have tried to use all that I learned.” She points to five particular skills that the course gave her: power mapping, facilitation skills, coalition building, fundraising mapping and how to get a message across. With new confidence and a clearer vision, , she set out with a bold goal: to make seat belt use mandatory in Tunisia.

Following the training in Memphis, Afef’s first step was to secure funding for the project. She acheived this by convincing a car manufacturer to provide support.  Les Ambassadeurs de la Sécurité Routière created a media campaign. To ensure maximum impact, they approached celebrities from cinema, sport, and TV and Members of Parliament and invited them to visit the NGO. They convinced them of the importance of seat belts and how by supporting the campaign they could help save lives. “It was challenging at the start.” Afef says. Yet, many celebrities agreed and, through the influence of the media campaign, they reached out to the general public to support mandatory seat belt usage. One of these spots “La Petite Sarra” received an award at the Global Road Safety Film Festival in February 2017.

With public support behind them, Afef approached the Tunisian Ministers of Interior and Transport and secured a meeting. They were impressed by the wide support that her campaign had received from the public and celebrities and agreed to seek a change in the law to make seat belts mandatory.

With this success achieved, Afef’s and Les Ambassadeurs de la Sécurité Routière’s next task is a campaign to encourage road users to obey the new law and wear a seat belt. This time, she is able to work in partnership with the Ministries of Transport and Interior, giving her campaign a stronger mandate. Funding has been secured. The impact of the new law will be evaluated next year to see how effective it has been in reducing road death and injury.

Afef’s story demonstrates how, with clear strategy and advocacy skills, NGOs can make a huge difference at national level. We are proud that the Alliance Advocates program has been a factor in equipping her to succeed in this remarkable achievement and we congratulate Afef and Les Ambassadeurs de la Sécurité Routière. We can’t wait to hear about the impact of their work.